If being a participant in Squid Game is a near-certain death warrant, you might as well have your best friend right beside you to keep you sane and focused on winning.

The truly misfortunate make up the player pool of Squid Game - compulsive gamblers, debt-ridden slackers, impoverished immigrants and meat-headed gangsters alike are all pitted against each other for a shot at winning an absurdly huge cash reward.

Due to the fatal consequences of failing a game, which are mostly team-based, players wind up congregating into groups and counting on their fellow players to survive. Two heads are better than one, after all, and trust, cooperation and force of will can go a long way into keeping your team alive.

Considering how they think, behave and act, with which player from the show would you be best friends? Would you be Sang-woo’s conniving companion? Or would you become assassination partners with Sae-byeok? Perhaps you’d even like to be big damn heroes like Ali!

Which Squid Game character is your soulmate? Answer the questions below to find out!

In a group, you usually act as the…

The key to surviving Squid Game is to be…

Which scenario scares you the most?

Nobody wants you on their team for the next game. What do you do?

Would you share a table with a stranger at a restaurant?

Would you make small talk with said stranger?

Do you always choose the side that’s currently winning?

Which of these is the likeliest reason for you to join Squid Game?

In which game would you choose to betray your partner?

If you could share your victory with another player, you’d choose…

The team needs you to quickly distract the guards. You…

Name a life goal you would fulfill with your cash reward

Gi-hun is flawed and he’s painfully aware of it. He’s less bitter about his failures than his peers, though. With his keen sense for reading people and motivating them to survive, he has the guts to lead but he’ll gladly defer to you if you’re willing to take charge. If you show him kindness, he’ll be your staunch ally for life.
Your Soulmate is Player 218 / Cho Sang-woo! Sang-woo’s ruthless will to win is something that resonates with you. You two would frankly be the ones with the most common sense. This former businessman is likely going to betray you after a while, but he’ll recognize that you have the stomach to do the same to him as well. With a soulmate like him, who needs enemies?
Your Soulmate is Player 067 / Kang Sae-byeok! 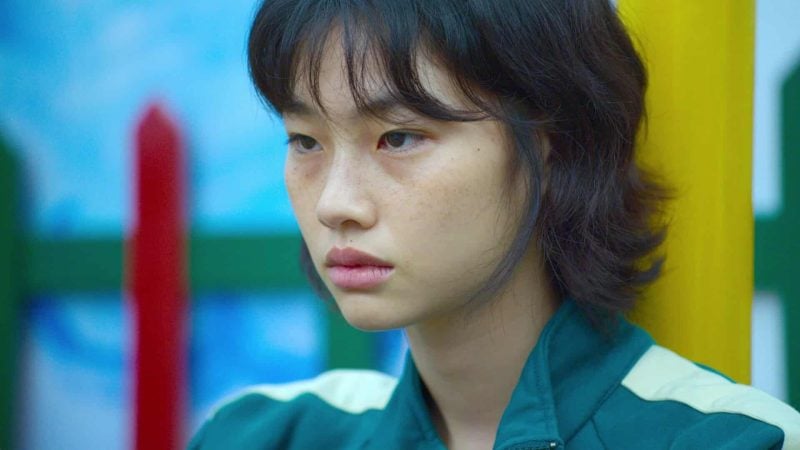 To Sae-byeok, family and loved ones are all that count. Everybody else is a threat… or a target. You might be able to relate to this no-nonsense and pragmatic way of life as well. Although she’s quite jaded, she might open up to you if you give her a little bit of hope and treat her as an equal.
Your Soulmate is Player 199 / Ali Abdul!

Ali has a big heart, and his instinct to help his friends and slight naivety might someday spell his doom, but you’ll be practically safe with him as your friend. He’s a trusting and strong-spirited individual despite being unfamiliar with Korean culture, so if you act as his guide, he’ll protect you with his life. Until you betray him. But you wouldn’t do that, right?
Your Soulmate is Player 212 / Han Mi-nyeo!

This wacko seems like the worst person with which to be soulmates, but perhaps you could identify with her street-smart and underhanded tactics. Mi-nyeo has no qualms about using any play in the book. She also has a flair for the theatrical, and her emotions can drive her to be very deadly against her enemies.

Go On With More Quizzes About Squid Game

Other Quizzes About Squid Game

Squid Game is a grim and unforgiving competition, but none of the main characters would have gotten far without relying on the aid of their fellow players. That doesn’t prevent a certain few from betraying their allies anyway, though.

Friendships are a key theme in the series. We get to see different kinds of friends in people like Sang-woo and Gi-hun, or Sae-byeok and Ji-yeong, or even with Gi-hun and Il-nam. These bonds help make the ordeal of the games a little more bearable, even as many of these friendships turn sour or are cut short.

With life and death on the line, the show asks exactly how far a friendship could go without succumbing to conflict, revealing how ordinary people may think and act in truly desperate situations.

Tragically, betrayal seems to be a common motif among many of the show’s friendships. Sang-woo conned a man who looked up to him as a mentor out of his chance to survive, Il-nam misled Gi-hun into thinking he was a defenceless old man, and even Mi-nyeo paid back the gangster Deok-su for an earlier betrayal by killing him.

Imagining one of the characters of Squid Game as your soulmate can be a sobering, but fun, thought exercise for understanding how the people you trust or accompany can act to help or hurt you in difficult situations.

The Playground Origins of the Games from Squid Game

The challenges in Squid Game draw their roots from classic playground games in Korea. While innocuous on their own, the fact that players get killed when failing a game in the series adds a sinister twist to these childhood pastimes.

We’ll discuss the origins of some of Squid Game’s challenges briefly below.

Dalgona – Sugar Honeycomb. “Dalgona” is a staple South Korean sweet treat, with a shape imprinted on a flat, molten sugar base. Eating around this shape sometimes nets kids another honeycomb.

Ojingeo – Squid Game. Named after the shape of the playing area, players are split into attacking and defending teams vying to cross or restrict access to different parts of the field.

Why are Squid Game’s VIPs disliked?

Apart from their insufferable personas in the show, the actors that play the VIPs in Squid Game have been criticized for their stilted and unnatural acting in English.

One of the actors, John D. Michaels, explains that non-Korean dialogues often have to deal with last-minute scripts that are usually translated by people who don’t naturally speak English.
Michaels also adds that they could not completely rewrite their lines as they did not have access to the full story and background of the series.

Why did Sang-woo join Squid Game?

For a graduate with honors and the “Pride of Ssamun-dong”, Sang-woo seems to have hit rock bottom. While he maintains an appearance as a successful businessman, he is secretly ridden with debts and financial losses amounting to billions of Korean won.

Sang-woo used his mother’s belongings as collateral for his disastrous investments. Despite being seen as a ruthless villain, he couldn’t countenance the thought of breaking her mother’s heart and resolved to join the Squid Game as a way to pay back his debts.