To become a ghoul is to make a difficult decision. Would you cling tooth and nail to your last shred of humanity, or tear into mortal flesh and feast on your former race?

You wake up hungry one morning, your stomach aching for nothing less than blood and raw human meat. Welcome to ghoulhood.

Perhaps you were turned after being tricked by another ghoul – maybe they pretended to be a defenceless old lady or your cute new date. Or perhaps you had ghoul DNA in you – whether through a freak organ transplant or the genetic inheritance from your ghoul parents.

Now that you must keep your distance from regular human society, how would you redefine your identity? Will you resist or embrace your animalistic desire to hunt and feed on your once-fellow people?

What reputation would you carve out as a ghoul? Which Tokyo Ghoul character are you? We’ve got quite the quiz for you to sink your teeth into, so enjoy!
⬇ Scroll Down & Take The Quiz ⬇

As a ghoul, would you enjoy feasting on humans?

Every ghoul must claim its own territory. Where would you lurk around?

Which part of the human body is the tastiest?

Which of these is your worst enemy?

You’d design your ghoul mask with…

You get along well with people who are…

To blend in with society, you’d like to work as…

Among ghouls, you would develop a reputation for…

Which hobby would you continue to enjoy as a ghoul?

What would you do after finding a badly wounded human?

Which food do you miss most as a human?

Which Tokyo Ghoul Character Are You?
You are Ken Kaneki!

“It is better to be hurt than to hurt others.” The show’s meek and gentle protagonist lived by this creed, even after turning into a carnivorous ghoul. Kaneki was a thoughtful and sensitive soul who had a strong instinct to help and protect others. But as everything post-Aogiri shows, it’s always the nice ones that you should be most afraid of.
You are Touka Kirishima!

Touka is naturally kind and caring, but the burdens of life and being a ghoul led her to construct a cold, impermeable shell from most people. She’s also somewhat of a contradiction – being highly confident in her skills while possessing low self-esteem deep down.
You are Amon Koutarou!

Most people accept that the world can’t be changed from its wicked ways. Amon thought differently. As an orphan, he vowed to bring the world’s ills to justice, even if it meant fighting face-to-face against powerful and merciless ghouls.
You are Shuu Tsukiyama!

The Gourmet lulls people to be at ease with his charming, intelligent outward persona. One moment, you’re discussing the intricacies of French cuisine, only to wake up the next moment hogtied and served warm on a bed of lettuce. Being with Tsukiyama is a sure-fire way to get caught up in plenty of his eccentric, cruel, and oftentimes predatory shenanigans.
You are Juuzou Suzuya! 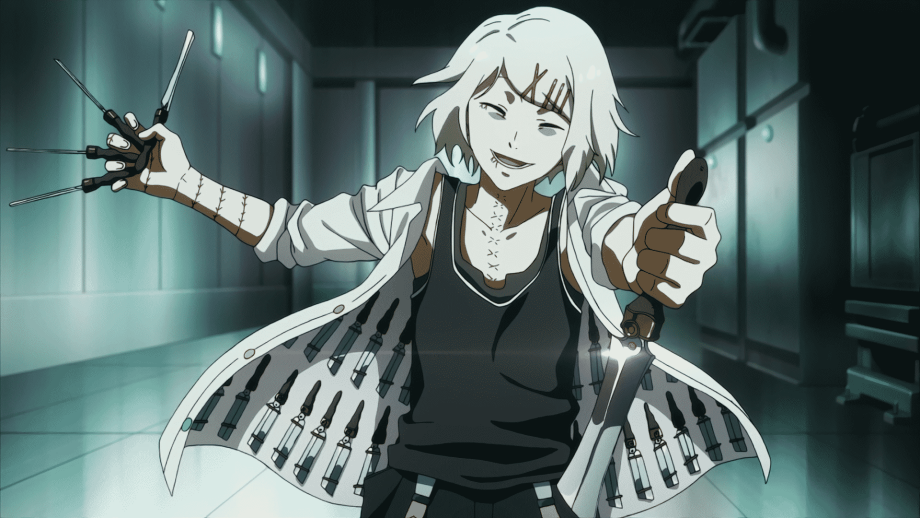 Don’t let his carefree and childish demeanor fool you – this sprightly CCG agent can make life a living hell for people who treat him unfairly. Although quite comfortable with being quirky and even a little twisted, Suzuya is also a consummate professional who strives to excel in his duties.

Which KonoSuba Character Are You?

Which Jujutsu Kaisen Character Are You?

Who is Your Anime Boyfriend?

Tokyo Ghoul is gruesome and raw – much like the carcass a human leaves after being attacked by a pack of Ghouls. It is currently one of the most popular seinen series in the last decade, attracting fans due to its grisly blend of dark drama, gore, sympathetic characters, and their moral dilemmas.

The setting of Tokyo Ghoul is mostly similar to modern-day Japan, although the world is beset by superhuman creatures known as Ghouls. In Japan, ghouls hide in the shadows, forever at odds with the Commission of Counter Ghoul (CCG) human agency.

The series revolves around college-aged Ken Kaneki, whose mild and soft disposition is put to the test after turning into a ravenous half-ghoul. The story depicts his adjustment to a new and dangerous life as an odd creature toeing the line between humanity and monstrosity. As part of the broader storyline, it also shows the ongoing strife between humans and different ghoul factions.

What is Kagune in Tokyo Ghoul?

A “kagune” refers to the muscle-like organs that appear from a ghoul during combat. It is composed of the same Rc cells that mutate humans into ghouls; thus, kagune can become as free-flowing as water and as solid as human teeth.

Kagune are considered weapons, helping ghouls prey on humans. They also increase a ghoul’s strength, resilience and agility once released.

Four main types of kagune exist, categorized by the body part from which they emerge.

The high-speed Ukaku (“feather-red”) resembles a flurry of feathers, and are released from the shoulder region.

Koukau (“shell-red”) appears heavy and quite dense, making it suitable to defense. It emerges from below the scapulae.

“Scale-red” Rinkaku is elastic and tentacular in form. Appearing from the posterior lumbar region, it can regenerate quickly and lash out for immense damage.

The tail-like Bikaku (“tail-red”) emerges from the tailbone. It is well-rounded with no glaring strengths or weaknesses.

Why does Touka cover her eye?

Most of Touka’s appearances have her covering her right eye with a bang. In-universe, the reason for why Touka hides her eye is implied to stem from a fear of birds that she developed after being pecked in the eye by a sparrow named Chunta. This irrational fear also known as ornithophobia.

Touka and her brother Ayato cared for Chunta before setting it free. Note that she was pecked seconds after Chunta regained his freedom.

As a stylistic choice, this also helps the series’ creator Sui Ishida convey her aloof and secretive nature.

Even during his first appearance, fans were quick to infer that Juuzou – with his propensity for stitches and his childish attitude – might have had a troubled upbringing.

Juuzou was captured by a monstrous ghoul nicknamed Big Madam, treating him more as a circus pet than a human. He was regularly tortured in horrific ways, and Big Madam often forced him to wear girls’ clothing. The ghoul eventually castrated Juuzou horrifically with a hammer, stunting his growth to physically remain a child.